Oh man. This is coming later than I would have liked. Last week was a bit of a squeeze, though, especially in terms of work, so the blog had to wait until now. I’ve really been looking forward to getting a new update done, despite the beautiful weather outside beckoning me…

Last week was my first week back in lectures and classes, which was a bit stressful because I now had more things eating up revision time. Lots of people enjoy having contact hours this term because it gets them out of bed and gives structure to their day, but I don’t: I can’t get anything done in the gaps between classes in town, as I’m the kind of person who needs to spend several hours straight at their desk or with a book to really get my productivity up, and the bus journeys are also a bit of a time-suck, as my tutor would put it.

The week didn’t get off to a very good start: while the first lecture was interesting and helpful, a topic was discussed in a way that really emotionally affected me. To cut a very long story short, something pretty awful happened to me about three years ago and it was never quite resolved, and while I’m more or less fine now (after a long period where I was definitely not fine), sometimes certain things happen that bring back some bad memories and are quite upsetting, and this lecture was one of them. I hesitated about putting this into a blogpost, as I’m well aware of the nasty comments floating around the internet about “oversensitive students wanting to be wrapped in cotton wool” and I didn’t really want to spark up a debate about warnings and so on here. Probably as a result of having internalised those critical views, I stayed in the lecture and went to one afterwards, when it would probably have been more helpful to have skipped the second one (it wasn’t relevant to me anyway) and talked about the first lecture with my boyfriend in order to resolve those feelings. Instead, I sort of put it aside, concentrating instead on revision and a very enjoyable lunch with a fellow Hispanist, meaning it then came out later that evening when I went to Zumba with my friend. It wasn’t a great evening and my low mood as a result stretched over the following two days, kind of scuppering any revision attempt.

On Tuesday my boyfriend and I went to see Nobel Laureate Sir Venki Ramakrishnan talk at  the Maths Institute, and we had really looked forward to it, having read the whole of his autobiography on the Nobel Prize website – I’d really recommend it, as it’s well-written and very funny, as well as inspiring. However, the talk itself was quite badly structured, containing a little bit of life story and a little bit of science, and doing neither justice. Normally I wouldn’t have minded so much, but at the moment I’m extremely sensitive to anything that takes away from revision time, and this was definitely an example! Last week was also extremely cold due to Arctic winds, meaning it was close to freezing most days, and often hailed or snowed. 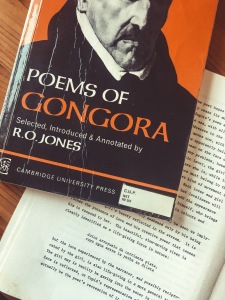 covered two very different revision topics last week: German Vergangenheitsbewältigung which refers to post-WW2 writing attempting to come to terms with the country’s Nazi past, and one of the most famous Spanish Baroque poets, Luis de Góngora. In autumn, I wrote a long essay on the former, analysing two of my favourite books from my course, Günter Grass’ The Tin Drum and Heinrich Böll’s Billiards at Half-Past Nine, both published in 1959. Unfortunately, for the purposes of revision, I’m only really looking at the latter, as it’s a more straightforward book and easier to write a concise exam essay about, in comparison to Grass’ mad, sprawling epic. It’s really enjoyable to revise topics you only covered a few months ago, as the material is still in your head and you know what you’re talking about! Not quite the case for Góngora, who is frequently deemed to be the most difficult poet in the history of Spanish literature, let alone the Finals course, and I sometimes regret taking him as a Special Author, as I often don’t have a clue what he’s talking about! I didn’t manage to finish revising his work, so I’m hoping to come back to that maybe this week if I have time.

Due to stress and a very slow, foggy brain that came as a result of Monday, I had to postpone my German Modern Paper revision session by a day so I could do enough work for it. I managed to write three practice essays in total – once was done on Wednesday when I was still struggling, and the other two were written the following day. I didn’t do awfully on them, but the marks I got are definitely not as high as I’m aiming for, so I need to practice! My tutor has an amazing way of explaining things that are quite difficult to grasp and put into practice, such as knowing how to contextualise your argument and focus more on form rather than content, so I’m hoping I demonstrate I’ve taken this on board in future essays! I wrote another practice essay on Saturday and handed it in, and I’m going to try and do as many as possible so my exam technique is as strong as possible. I did manage – just about – to get one translation done while feeling low, and that wasn’t bad at all, which was heartening.

My friends really helped me get through this difficult week, both in the first few days when it was hard to get anything done, and towards the end of the week when I was beginning to feel better. On Friday, I went out for dinner with my best friend, and it’s so valuable to have someone in the same situation as you, who fully understands the pressure, and doesn’t think you’re boring if you’re not capable of making thrilling conversation about anything other than work! I’m not seeing a lot of people right now partly due to that: the part of my brain usually occupied with being interesting when socialising has sort of shut down due to intense revision, and it’s wonderful to not feel under pressure or scrutiny because of that! On Sunday, I was feeling well enough to go to Zumba with my friend and regular exercise buddy and attempt to make up for Monday, but we found it was cancelled due to the Bank Holiday! We went to the gym at St John’s College instead, and I was incredibly touched when she gave me this motivational cross-stitch and a lovely card with an even nicer message on the back. I may not have a lot of friends or a concrete friendship group, but I wouldn’t change a thing – I’m so grateful for those around me who always have time for me.

One lovely bright spot of my week was when I met up with a lovely A Level student from Newcastle who’d been emailing me about Oxford applications, and who happened to be up for the Open Day. I had the honour of showing her around Magdalen, meeting her grandparents and chatting to her over tea – I’m always inspired by how motivated and dedicated prospective applicants are, and I’m really privileged to be able to give advice and reassurance to such talented students.

As promised, that wasn’t too long at all! I tend to post more on Snapchat than anywhere else at the moment, so do follow me at “oxfordlinguist” if you don’t already!

Have a lovely week, and don’t forget to VOTE if you’re in the UK – until next time!

My Tweets
Infinitely Full Of Hope

A blog infinitely full of hope, but not for you

my reluctant travels
BEYOND BETWEEN MEN

HOMOSOCIALITY ACROSS TIME: A SYMPOSIUM

a jaunt through the landscape of literature

My own tiny little corner on the internet